OK, Mum, NOW I understand why you have so many books about mountaineering, and especially books by Joe Simpson. What a book! The opening chapter is without a doubt one of the best opening chapters I have ever read – the subject matter alone is spine chilling. From the frontispiece – In 1992, an Indian climber was left to die alone, high on the South Col of Mount Everest, by other climbers who watched his feebly waving hand from the security of their tent, (wait for it…), thirty yards away. Why did these onlookers not hold the dying man’s hand and comfort him? The answer appalls Joe Simpson, who was himself left for dead in a crevasse in Peru in 1985 ; “I shall never forget the horror of dying alone – the awful emptiness of it”.

I’m the first to admit a severe lack of knowledge about mountaineering, and Everest, although I did know the Tibetan name for the mountain is Chomolungma, meaning Goddess Mother of the World, and I now know the Tibetan people on the other side of the mountain call her Sagarmartha, meaning Goddess of the Sky. And of course, that the first successful ascent was made by the New Zealander Edmund Hillary and his Sherpa, Tenzing Norgay, in 1953.

What I did not know much about was the amount of people who now attempt the mountain, in some cases woefully unprepared to do so, and the mercenary nature of modern mountaineering. Bearing in mind that this book was written in the 1990’s, I resorted to Google to update some of the shocking stats that Joe Simpson presents in his book.

As of today, around 4500 people have successfully climbed Everest. And more than 300 have died in the attempt. That’s over 6.5%. The percentage of deaths, incidentally, is much higher on Annapurna, which has also been climbed by way less people.

Many of the bodies have never been retrieved, although with the effects of global warming, many are now surfacing. Some of them are even used as landmarks, like ‘Green Boots’ who died in 1996, and beside whom climbers make camp on the South Col. I’m not sure, but he could well be the Indian climber to whom Joe refers in Chapter 1. There are images on Google – too morbid for me to copy here, I’m afraid.

If you want to climb Everest, you’ll need around three months, plus preparation time, and an awful lot of money – currently over $75,000 USD to join a professional guide for a summit attempt, with no guarantee of success – and with only two brief windows of opportunity every year. In which you will be fighting with other parties to make your way up.

Enough facts – you can Google, the same as me. The essence of this marvellous book is Simpson’s incisive questioning of the changes that have come about in the moral climate of mountaineering…as in other facets of life. Would you leave someone to die so that you can say, ‘I have climbed Everest’? Some people have done exactly that. He presents a convincing argument that the pure and noble spirit which once existed among these bold and adventurous souls has been eroded, as it has in many other aspects of society.

In Chapter 5, as an example, he quotes a photographer from a widely respected newspaper saying that if he witnessed members of the Royal Family involved in a car crash, he would take photos before he offered assistance. Let’s not forget that Princess Diana died in August 1997, the year this book was first published. 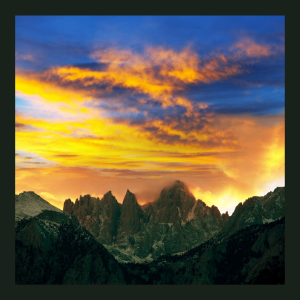 I thoroughly recommend this book. I enjoyed it, was horrified by it, felt cold reading it, and still have no desire to climb mountains myself, although I am now looking for Joe Simpson’s other books in Mum’s collection – I have already located one, and also, ‘Against the Wall’, by Simon Yates, his climbing partner in Peru who had to cut a rope dropping Simpson into that crevasse in Peru.

If you would like this, Mum’s copy, please get in touch either here or via

or you can purchase a copy on Amazon here