Two books, very different from one another, both by American authors, and both read by me in the sunshine last week. Let’s start with ‘tuesdays with Morrie’.

It describes itself as, ‘an old man, a young man, and life’s greatest lesson’, and the lesson is ‘How to live’, delivered in the face of death. Mitch Albom is an accredited and acclaimed sports journalist who had six books to his credit before this one, published in 1997 – Mum read it in September 2006.

What’s it about? Well, Mitch re-connects after twenty years with a Professor who had been for him the teacher you don’t forget, the one that delivers the important lessons and makes you think and question critically, a life changing ability. In an ideal world we would all have a teacher like this, and one thing this book did make me do was think about my teachers. The one I remember clearly, who delivered sufficient enthusiasm for his subject to make me an enthusiastic student, was my Latin teacher! His name was Mr Moore, and I think his passion for a dead language was what kindled my love of history, I’ll never forget him declaiming Catullus, waving his arms around as Julius Caesar conquered Britain, whereas my History teacher just wrote oodles of stuff in very small characters on a blackboard for us to dutifully copy into our books.

But I digress! Mitch restarts his relationship with Morrie, his old Sociology Professor, as Morrie is dying from ALS, a horrible terminal illness of the neurological system. He sees him for the first time in years, and finds Morrie as engaging as ever, facing his death philosophically and with a wry irony. Over fourteen Tuesdays, Mitch visits, and chronicles the visits – he is a journalist after all, and so goes equipped with a tape recorder, which gives the suggestion that this was a book that he planned to write, together with Morrie who wanted to teach one last class.

You may well have already guessed that I did not enjoy this very much. Don’t get me wrong, it wasn’t the subject matter; death is, after all, a reality we will all face at some point, and Morrie’s philosophising is on point. But it all felt a little ‘self-serving’ to me – perhaps it is a difference in culture, perhaps the style in which it was written. I felt very much the same about this as I did about ‘Eat, Pray, Love’, which I really didn’t like at all, especially once I found out the author had already signed the contract and been paid before she set off on her journey of self-obsessed self-discovery!

However. It has sold a great many copies, so I am probably in the minority, and as always, Mum’s copy is here and ready to be gifted forward if you would like to read it.

My second book today is Anne Tyler’s ‘Dinner at the Homesick Restaurant’ which will be winging its way to my dear sister in Spain later today. Debi asked me at the very beginning of this project if she could have Mum’s Anne Tylers, so this was claimed before I read it…and it is a book I enjoyed a great deal more than ‘Morrie’! 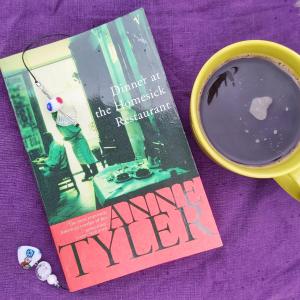 Anne Tyler is an eminently READABLE author, and after all, isn’t that what we want from a book? She is an absolute mistress of creating ordinary families, with ordinary problems, and elevating them into wonderfully intricate stories, and this is no exception. Mum read this twice, in Oct. 2002 and again in April 2015, when I think she was re-reading all her Anne Tyler’s, and I know she would have enjoyed it.

The central character is Pearl Cody Tull, and the book takes us through her life and that of her three children. Pearl feared she was destined to become a spinster Aunt until she married a younger man, who dragged her around the country and then suddenly abandoned her and the children, a fact she doesn’t actually tell the children for some time!

As she reaches the end of her life, she looks back and reflects on it, and the story shifts to the perspective of the children – and as Anne Tyler always does so well, we now hear both sides of the same stories, as perceived by the characters who live them. The ‘Homesick Restaurant’ of the title is her favourite and yet disappointing son Ezra’s business, and is a focal point in many ways, not the least being the number of completely unsuccessful family meals held there!

I don’t think this is her best, but it is certainly a worthy read, I read it cover to cover in an afternoon and enjoyed it very much – I have two quite weighty books on the go at the moment, and found this to be purely entertaining. Recommended!