Two books again – both of these were fairly quick reads, especially the Susan Hill…plus with lock down, I have found a lot more time for reading! Both of these were enjoyed sitting in lovely warm Spring sunshine in my garden. It’s a tiny garden, but I love it – I am surrounded by many plants that belonged to Mum, who was an avid gardener even though she also only had a tiny garden…like mine is however, it was crammed with all sorts of lovely plants in pots and the ground.

I remember her growing a horse chestnut from a conker in a large pot on the roof which caused no end of trouble getting it down! and I am in the same boat at the moment with a couple of English Oak saplings I’ve managed to start from acorns collected at Blenheim Palace in Autumn 2018 which I’m probably going to have to guerrilla plant somewhere…! 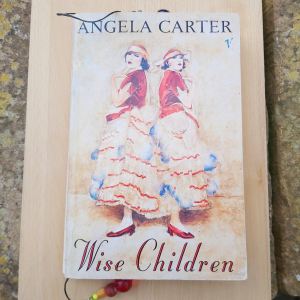 To the books. I loved the Angela Carter! It’s fast and funny, bawdy, and sometimes extremely poignant in its exploration of a theatrical family with an astonishing quantity of twins over the course of a century. Narrated by Dora Chance, one of the twins and from the wrong side of the blanket, illegitimate daughters of the Shakespearian actor Melchior Hazard, himself a twin. Dora and Nora achieve fame themselves as the Lucky Chances, for whom Hamlets soliloquy becomes a music hall sketch in which they ask whether a parcel should be delivered ‘to 2B or not 2B’.

It really is good. The descriptive passages are wonderful, I have to admit to laughing out loud at some of the scenes when the Lucky Chances make it to Hollywood between the wars…wait till you get to the weddings! And the house in Brixton where the twins were born, brought up by someone they called Grandma because their mother had died at birth…or was Grandma their mother? Their uncle, Melchior’s twin brother Perry, is more of a father to them in every way…or is he their father? And of course costumes, make up and scenery play a big part in the story – as well as characters called Wheelchair and My Lady Margarine.

Mum read this in 1993 and obviously liked it enough that it survived her huge cull of her books when she moved out of the family home and into a smaller flat, taking only the books she loved and knew she wanted to read again with her. I think it is a lovely read.

In a completely different genre, here we have a good old fashioned ghost story with a twist at the end that completely took me aback…usually a good sign!

It is a slim volume and I read it fast, totally engrossed in it. Mum read it in 2012; it was written in 1983, and apparently there is a film version starring Daniel Radcliffe which was released in 2012, possibly why Mum bought the book that year. It was also adapted for the West End stage, I’m not sure if it is still running though – and of course, it wouldn’t be at the moment anyway with all our theatres closed.

The narrator is a young and widowed London solicitor, Arthur Kipps, sent to a remote village on the edge of marshlands to attend the funeral and then sort out the affairs of Mrs Alice Drablow of Eel Marsh House. At the funeral he sees an emaciated young woman dressed in deepest black, about whom no one in the village will talk. Equally, the house itself, isolated at the end of a causeway across the marsh which is impassable at high tide, is mysterious and avoided at all cost by the locals except for one man who will take Arthur there in a pony and trap.

The language used is so appropriate for the time and place – it is almost H.G. Wells or John Buchan in tone. Ghost stories are not something I will often choose – one of the most frightening stories I read as a child was The Red Room by H.G. Wells, I think it scarred me for life! But reading this in a sunny garden was an absolute pleasure.

So, both books are now looking for a new home, and if you would like one, please just get in touch, ideally through the Facebook page and group or on Instagram, both links below! And I will pack it up with love from Mum and I and post it to you.