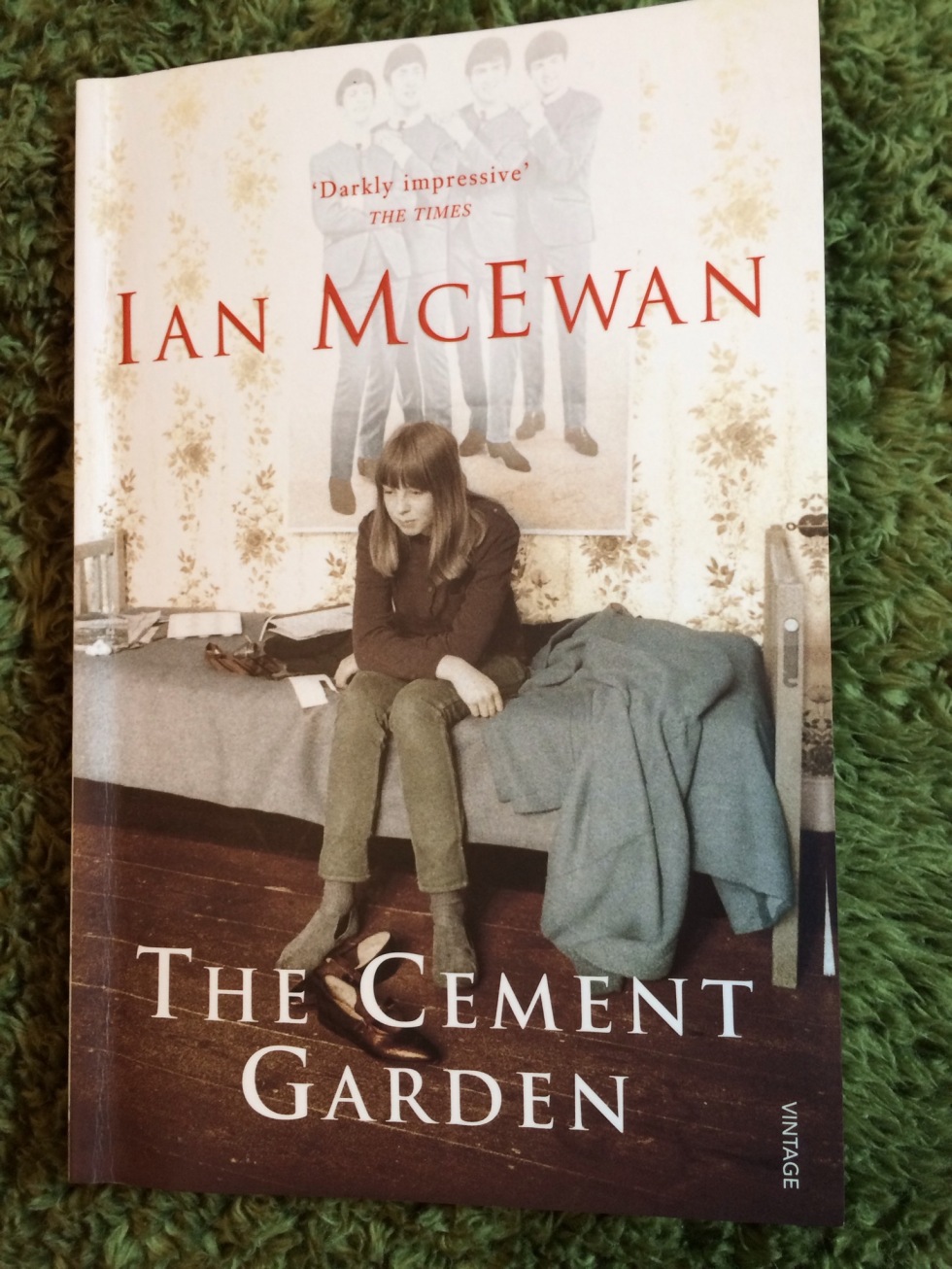 Crikey. This was Mr McEwans first novel, written in the Seventies, and it’s bleak, macabre, and haunting in a deliberately flat and atonal way. I don’t think I have ever read a book quite like it and there were passages that make it unforgettable even though you may wish to forget them. Mr McEwan himself says that “It fed into an apocalyptic sense of things” in the late Seventies in London, a fairly bleak landscape of a filthy, semi-functional city. The narrator, Jack, is a fifteen year old who recounts in a virtual monotone the events of a long hot summer in the one remaining house in a street of collapsing prefabs, where his father has created a hideous garden of winding paths and concrete before dying, leaving Jack, his sisters and younger brother, and terminally ill and exhausted mother, who, upon dying in her bed at home, is entombed in cement in a trunk in the cellar by the children ‘to keep the family together’.

I found a New York Times review from 1978, when the book was first published, by the wonderful Anne Tyler, and I cannot possibly improve upon it so I am copying and pasting it here for you. I wish I had read this while Mum was alive, I’d have enjoyed discussing it with her. As always, if you would like to have this Mums Book, please let me know and it will be on its way to you quick as a flash – I doubt some of the more disturbing elements of the book will leave my thoughts as quickly!

his brief novel is really a kind of extended dream, although there’s nothing dreamy about the precision and clarity of the writing. Its narrator, Jack, is a 15-year-old English boy so sunk in self-loathing that there are long stretches when he can’t even be bothered to bathe or brush his teeth. Jack’s father is a crabbed, oppressive man whose greatest pride is a tightly constructed garden of plaster, plastic, rocks and widely spaced tulips; his mother is not much more than a shadow, and their neighborhood is a wasteland of abandoned prefabs. Life here seems smothered, flattened. For Jack, his two sisters and his little brother, the only pleasures are those that erupt beneath a rigid surface: some rather joyless sexual games and a few stolen moments of willful disobedience.

“The Cement Garden” describes the process that steadily isolates these four children, until they’re so absolutely alone and so at odds with the rest of the world that there is not way of returning to normal life. First their father dies, and then their mother. The loss of their mother leaves them without relatives; so to avoid being separated they keep her death a secret and bury her in a trunkful of wet cement in the basement. From then on, it’s all regression and decay. Garbage spills across the kitchen floor, food rots and flies swarm. The cement in the basement develops a crack and the presence of the body becomes increasingly obvious. Tom, the little brother, first transforms himself into a girl and then into a baby in a crib, and Jack and his older sister develop a sexual relationship that makes them seem, paradoxically, almost as infantile as Tom. Even the neighborhood grows starker, as the prefabs crumble and fall away. By the end, we’re left with four stripped, empty characters and not a shred of hope.

In one sense, this is an easy novel to read. The story skims along, and the style is so direct that we have no trouble accepting the fact that it’s a 15-year-old speaking. Jack is articulate but never precious; he succeeds all too well in letting us into his numbed, frozen world. “Except for the times I go down into the cellar,” he says, “I feel like I’m asleep. Whole weeks go by without noticing, and if you asked me what happened three days ago I wouldn’t be able to tell you.” He wanders through a burnt-out building and discovers a mattress in a bedroom. “The people who slept on that mattress, I thought, really believed they were in ‘the bedroom.’ They took it for granted that it would always be so.” And when his sisters, in one short-lived burst of energy, set a conventional meal upon the table, he’s surprised that “There was a chair for each plate. . .as if we were real people.”

But what makes the book difficult is that these children are not–we trust–real people at all. They are so consistently unpleasant, unlikable and bitter that we can’t believe in them (even hardened criminals, after all, have some good points) and we certainly can’t identify with them. Jack’s eyes, through which we’re viewing this story, have an uncanny ability to settle upon the one distasteful detail in every scene, and to dwell on it, and to allow only that detail to pierce the cotton wool that insulates him. At his mother’s deathbed, he observes “a particular arrangement of mucus in her nose.” Watching his little brother, he takes special note of the “large tube of green snot” hanging out of one nostril. And this is not the first book in which a pack of determined children bury their mother in secret, but it’s almost certainly the first to cover, with such meticulous care, the putrefaction of her body. Nor is their reason for the burial a positive one; it’s not love or loyalty that holds them together, but a hostility toward the rest of the world. Generally they’re callous with one another, if not downright cruel.

It seems weak-stomached to criticize a novel on these grounds, but if what we read makes us avert our gaze entirely, isn’t the purpose defeated? Jack, we’re being told, has been so damaged and crippled that there’s no hope for him. But if it’s a foregone conclusion that there’s no hope whatsoever, we tend to lose hope in the book as well.

Imagine how Beryl Bainbridge might have handled this: the same devastated, English urban scenery, some stunted lives, but a small, manic gleam beneath that saves it all. Ian McEwan is a skillful writer, absolutely in control of his material, but in this first novel, at least, he could use a little more gleam.

Anne Tyler is the author of “Searching for Caleb,” “Earthly Possessions” and other novels.

EDIT; The Cement Garden has left the building and is now in Derbyshire. Hope you enjoy it, Anne!

The Craft Room and Beyond
MetNews